If you want to spice up your family or social gatherings – Try playing Teen Patti! Popularly known as the ‘Indian Poker,’ it’s one of the most favorite games of all time amongst players. Teen Patti in Hindi or ‘Three Cards’ is similar to ‘Three Card Brag,’ a popular British game.

Not only is it famous in India, but it’s spread across South Asia too. ‘Flush’ and ‘Flash’ are other tags to this Indian gambling game in parts of Asia. Want to learn more or try it out online with real money? Check our chosen casinos and the info below! 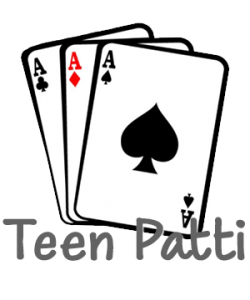 » How to play Teen Patti

We have come so far in online technology now, so it’s prevalent to play Teen Patti online in India. Enjoy this fantastic game from all your online devices. We recommend you to play Teen Patti in the live casino section. There you get as close to a real casino experience as possible.

In the Indian context, there are several theories about how this game came into play. Still, there is no concrete evidence about its history. But one thing’s for sure; Teen Patti has grown into a super popular online casino game.

Furthermore, a maximum of 10 players can play Teen Patti, though 4 to 7 is the ideal number. When you play online, it’s most common to play alone. Then you sit down at the table and start playing.

The player who has the highest authority cards win the game. We’ll see what that means below. Betting is done in a counter-clockwise direction to the dealer and is played with a deck of 52 cards.

How to Play Teen Patti

Let’s dive into how to play Teen Patti online and offline! The primary things required are 52 Card Pack, Dealer, plus Players. The dealer distributes exactly three cards to all the players.

Once the cards are received, the players have two options: play blind or play seen.

‘Play blind’ is to bet without seeing the cards or when the cards are facing downwards.

‘Play seen’ is when a player decides to place a bet after seeing the cards. A pot is placed in the middle of the table, where each player will put a minimum stake into it before playing.

There’s no limit on the smallest stake, but the players’ collective decision.

If a player chooses to play blind, he has to put half the amount as the player’s stake who decides to play seen. The ranking of the cards determines the winning of a player.

Now, what does ranking mean?

The Ace has the highest priority or weightage than other cards, and the number ‘Two’ has the least importance or ranking.

Here is how the ranking can be:

Now that you’ve understood the ranking plus Teen Patti’s initial set up, the real betting starts. The game begins from an anticlockwise direction from the player sitting left to the dealer. Also, don’t worry about the time limit as there is non for this game. It can be played as long as one chooses to.

If a player wishes to stop, then he has to fold and pay nothing. That also means he loses all his money in the pot.

If a player wishes to continue, he can place a bet in the pot, and the amount depends on whether the player is playing blind or seen. A seen player should put twice the amount of a blind player into the pot while betting.

Furthermore, this is a loop. It continues till all the players decide to fold except one or two. If only one remains, all the money in the pot goes to him. But, if two players remain, the one with the highest rank is given the top priority. In other words, he/she wins the game.

A tight player will fold cards that are often weaker. On the other hand, a loose player bets hands like this more often.

It’s precise as regular texas hold’em poker. Some players like to gamble more, and that’s something you will find out at Teen Patti as well. They are thus playing more card combinations than the other players.

1. Entry Fee: When the boot or the ante amount is put on the table, the betting rounds start. It can be the same amount or different for each player at the table. It can vary by mutual agreement of all players on the table offline & online; everyone plays for themselves.

2. Post: It is when a player is away from the seat for a brief period. But this player has to pay the ante of the hand he wants to play.

4. Call and raise (chaal): Once the regular round of bet starts, the player can call or raise the existing bet. The first player can keep the amount, but the next one can raise and put a new bet level. So the other players will analyze if they accept the new level or not to continue playing.

When playing live Teen Patti, the strategy and gameplay are a bit different compared to offline.

Furthermore, the betting limit is the value a player bets or raises. They come in the below four forms:

1. Fixed: The maximum amount raised comes down to the final bet amount. That is when the players play with a betting structure that’s fixed. It’s beneficial as you get helpful control over the action during the game.

2. Spread: It works almost in the same context as the fixed, but there’s a difference. Players put a maximum bet, then can bet within that, but without passing it. In other words, use this to mix up your limits to have both a minimum and a maximum level.

3. Pot: The game structure lets players raise the bet a step further. Betting the same amount as the pot in the same round is quite risky for anyone on the table. But you know what they say, high risk, high reward.

4. No-limit: Players do not have a limit to bet during the round of bettings. They can put any amount on the table.

Here, let us learn some of the most important Teen Patti rules:

Trail or Set (Three of the same kind)

To get this hand, you need to have three cards of the same rank, no matter the symbol. The best and highest you can get is three aces (diamonds, clubs, hearts, or spades). The lowest one is three 2’s.

This hand is a bit more complicated compared to the previous. To complete this, you need to have three cards simultaneously with the same color, following the same rule of the rank: Queen, King, including Ace of hearts, for example.

It is three cards in a row or a sequence, no matter the suit.

The rank doesn’t matter for these three sequential cards, as long as they have identical colors.

The color doesn’t matter here as long as the two cards have the same rank. Between the pairs, the highest one will win, but all depending on the cards’ value. As we explained before, aces would be the highest and 2’s lowest pair. So players should aim to get the higher pairs.

This is the hand in which the three cards are not in a sequence, not all are from the same suit, and there are no two cards with the same value. When the final two players have a standard high card, the next highest card will decide the winner.

“Teen Patti Online – The number one choice amongst Indian players!”

Gone are the days when Teen Patti got played with family members during the time of festivities. Nowadays, with the increase in Internet usage and smartphones, traditional games are going digital too.

Teen Patti once was played during Diwali’s time, is now being played all around the year and anywhere. Not sure if that took away the essence of the game, but it sure has made it all more convenient.

You can play the game with friends worldwide by, for example, sitting on your couch. We see that gaming companies that focus on online gambling in India offer Teen Patti at their sites.

Physical presence is no longer needed to connect with people to have a fun gaming night. In other words, you can play Teen Patti on various websites and mobile apps. If you feel like playing the game with real money, click here to see our Teen Patti casinos. 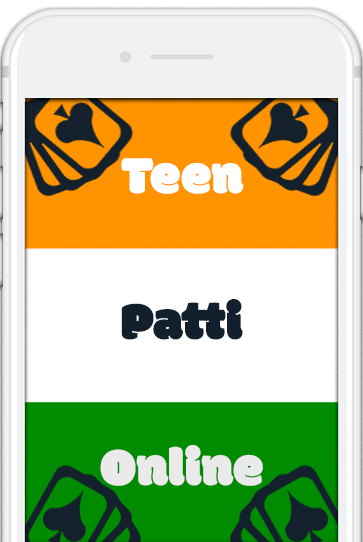 As mentioned earlier, online sites have made it easier than ever to play card games. Most of the games have gone digital, and we are getting to experience traditional games in a more contemporary way.

Teen Patti has made its way to casino games, much like other card games. Though it is a game of chance, you win a significant sum of money if the bet placed goes your way. Also, when playing online, the game goes faster and smoother compared to land casinos.

Teen Patti Online is played by 1. Downloading the app, then play for fun or real. Or 2. at different websites that offer Live Casino. So you no longer have to wait for Diwali or the next family gathering to play this game with online Teen Patti.

That was a brief overview of this exciting Indian betting game. Though it is a game of chance, applying a wee bit of strategy can help you win in Teen Patti. It is not straightforward like Andar Bahar, but that’s what makes it all more interesting.

Furthermore, it might take some time to learn the game if you’re an amateur, but you will embrace it once you get the hang of it. That said, practicing responsible gambling is paramount.

Remember that it’s just a game and know when to stop to avoid severe consequences. We don’t want anyone ending up with gambling issues.

Head out there and enjoy the game and hope for some nice wins!.

Can you play Teen Patti online with real money?

Yes, you can play Teen Patti online with real money at various gaming sites. To get a real casino feeling, enter the Live Casino section. Have money on your account, sit down, and play.

Can you use welcome bonuses on Teen Patti online?

Most gambling websites will give you welcome bonuses, and you can use them on Teen Patti. First, activate the bonus with a deposit and then look for the game. But, please read the terms and conditions before starting anything. It’s important to know where the bonuses function. If everything checks out, then start playing and hope for some wins.

When it comes to online Teen Patti with real money, some might think it’s something shady going on. In short, the sites haven’t and can’t host rigged games. They already have a slight mathematical advantage over the players anyway. In other words, the casinos will win money from all players in the long run.

Where can you play Teen Patti online in India?

There are numerous places where you can play Teen Patti online. If you want to play for fun, there are downloadable apps. But if you prefer gambling with real money, we recommend online casinos. You find the best casinos here on our website.